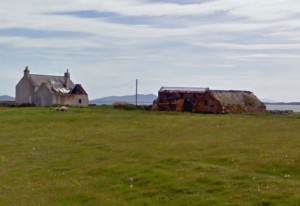 Macleod’s Gunnery situated close to the Youth Hostel is the oldest surviving building on Berneray, dating back to the 16th Century. This was once the home of the famous 17th Century Knight Sir Norman MacLeod, who was a scholar and soldier and fought at the Battle of Worcester. A marble slab above the Gunnery commemorates his birthplace. Close to the Gunnery are a cluster of traditional Black Houses, some of which have now been restored and are inhabited once again.